Cranial osteopathy sounds like it would deal with the head. It does indeed deal with structural and fluid restriction in the head, and frequently is helpful in treating headaches, head injuries, infants who have had difficult deliveries (strain to the head), plagiocephally (asymmetric head), ear infections and sinus infections – but cranial osteopathy does much more. With cranial osteopathy the osteopathic physician interacts with a cyclic fluctuation of fluid within the body. This fluctuation is believed to be a result of movement of cerebrospinal fluid, cranial and spinal membranes, cranial bones and the brain. The overall movement can be felt through the entire body.

Osteopathic physicians specializing in cranial osteopathy are trained to sense this movement with their hands, make a precise diagnosis, and treat to assist this normal, healthy movement which should be present. Cranial osteopathy involves interacting with this fluid movement through the entire body, while at the same time addressing structural restriction of joints, ligaments, muscles and fascia. Because cranial osteopathy is grounded in treating the structure of the body, it is frequently helpful for back problems, neck problems, and other musculoskeletal complaints – not just problems with the head. When diagnosis and treatment is done on the head, it addresses general and specific restrictions which are present in the cranial membranes, between the cranial bones, within the bones (especially in infants and children when some bones are not fully formed), within areas of the brain, and of the fluids in the head (blood and cerebrospinal fluid). A doctor of osteopathy specializing in cranial osteopathy will not treat just the cranium; he or she will treat the pelvis, the sacrum, the vertebrae and ribs too. This broad approach is necessary to successfully assist the complex human body and to find the underlying cause of a patient's condition. 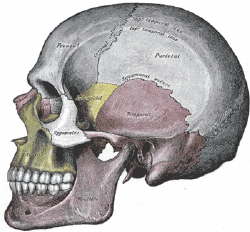